Coach Mahon was the Head Women’s Basketball Coach and an Assistant Professor at Culver-Stockton College from 1995-2002. During her time as a student athlete at C-SC, Carrie received a 1992 All American honorable mention for women’s basketball and was named a 1993 All American. Mahon was inducted into the C-SC Athletic Hall of Fame as an individual for women’s basketball in 2003 and again in 2010 for her participation on the 1991-92 Team. Coach Mahon was named Conference Player of the Year in both her junior and senior season on “the Hill.”

When asked about her time at Culver-Stockton College, Mahon shared, “(it) reminds me of a country song…The House That Built Me. Thank you, Kathy Turpin and the Lady Wildcats.”

Pictured is a photo of the Plant City’s Girls Basketball team, courtesy of the Hillsborough County Public Schools’ Athletic Department.

Carrie (Connell) Mahon `93, recently led the girls’ basketball program at Plant City, Florida to its first state title. Mahon was named the state’s overall coach of the year by the Florida Dairy Farmers. She is only the second area coach to ever win the award. 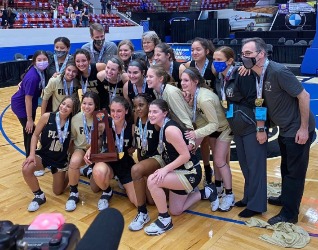