Four Culver-Stockton College students were given awards during the 55th annual Originale area artist exhibit and competition, sponsored by the Hannibal Art Club. 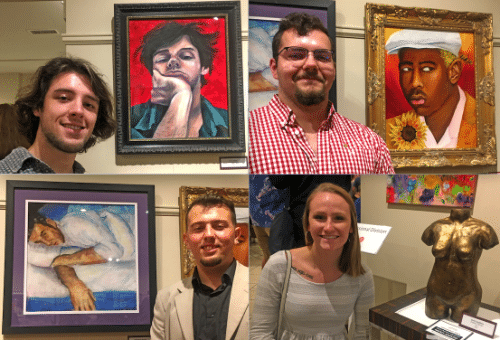 In the non-professional division, Jordan Graves of Springfield, Ill., received the Pinnacle Award, donated by LaBinnah Bistro, for his pastel titled “Grandpas Resting.”

A merit award was given to Keelie O’Brien of Kahoka, Mo., who won the Nancy Beckner Memorial Award for her piece titled, “Gold Goddess.”

The Hannibal Art Club has all 112 original pieces of art created by 62 artists living within a 50-mile radius of Hannibal on display at the Hannibal Arts Council, 105 S. Main. Gallery hours are from 9 a.m. to 5 p.m. on Monday, Wednesday, Thursday and Friday and from 11 a.m. to 2 p.m. Saturday.