Schellenberger named one of Herald-Whig's 20 Under 40

Congratulations to Lauren Schellenberger, dean of Culver-Stockton College and the vice president for academic affairs, for being recognized in The Quincy Herald-Whig's annual 20 Under 40 publication. 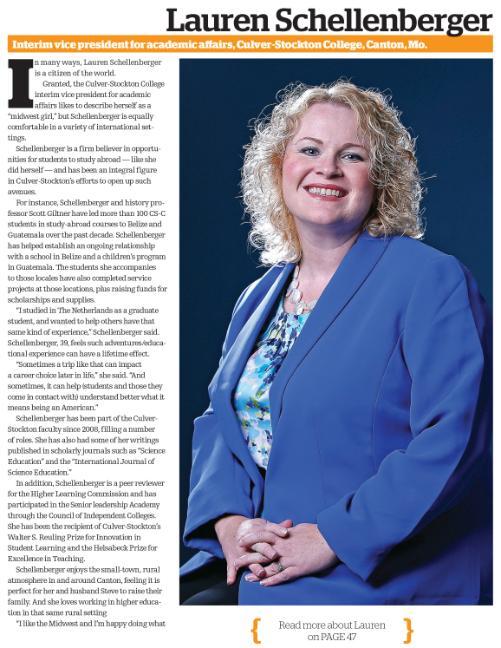 Congratulations to Lauren Schellenberger, dean of Culver-Stockton College and the vice president for academic affairs, for being recognized in The Quincy Herald-Whig’s annual 20 Under 40 publication.

Schellenberger was appointed interim vice president for academic affairs and the dean of the College in June 2018, replacing Daniel Silber. She is only the second woman to be the dean since the position was created in 1920.

Schellenberger joined the faculty at C-SC in the fall of 2008 as an assistant professor of biology, then became a tenured associate professor in 2014 before becoming the chair of the Applied Liberal Arts and Sciences division.

Some of Schellenberger’s work has been published in scholarly journals such as Science Education and the International Journal of Science Education. She’s a peer reviewer for the Higher Learning Commission, the regional accrediting body for 19 states, and she participated in the Senior Leadership Academy through the Council of Independent Colleges in 2016-17.