Skip to content
Culver-Stockton College>Recent News>Uncategorized>Butler, Campbell to be inducted into Education Hall of Excellence

Butler, Campbell to be inducted into Education Hall of Excellence

Lori (Bastian) Butler '77 and James (Andy) Campbell '94 will be inducted into the Culver-Stockton College Education Hall of Excellence during a ceremony at 3:30 p.m. on March 19 in Meaders Lounge in the Gladys Crown Student Center. 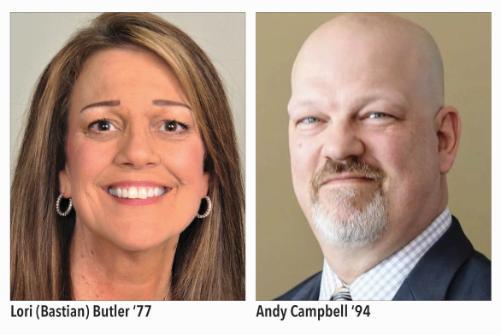 CANTON, Mo. — Lori (Bastian) Butler ’77 and James (Andy) Campbell ’94 will be inducted into the Culver-Stockton College Education Hall of Excellence during a ceremony at 3:30 p.m. on March 19 in Meaders Lounge in the Gladys Crown Student Center. A reception will follow.

Butler attended C-SC from 1974 to 1977, earning a bachelor of science degree in elementary education and minors in mathematics and French. She believes the education she received from Culver-Stockton provided a strong foundation for her long career.  She first taught for six years in Highland, Ind. During that time, she obtained a master’s degree in elementary education with an emphasis in language development. She earned a master’s degree in school administration several years later.

Butler transferred to Hammond, Ind., in 1984 to pursue her goal of working in an urban at-risk district. She taught kindergarten and pursued professional opportunities within the district. She was asked to lead a district language development team in 1989. After four successful years, she decided to return to the classroom.

Throughout her 28 years in the district, she held many positions focusing on students and families, including instructional coach, Indiana mentor/presenter, assistant principal of curriculum and programs, grant writer, family liaison, RTI coordinator and data analyst, cadre leader for mathematics and literacy and Purdue student teaching placement and supervisor.

Butler retired in 2012 and accepted an education specialist position with Pearson Services. She traveled the country for seven years sharing her passion with teachers. Now she implements her language development skills while digitally teaching students in China. Butler and her husband now reside in Bradenton, Fla., and they have enjoyed travels to places such as the Cayman Islands, Mexico, Italy, Spain, Greek Islands and France.

He received his master’s degree in education/secondary school administration in 2004 from the University of Central Missouri, then made the transition to administration in 2007 when he was named assistant principal and then principal in 2009 at Harrisonville High School in Harrisonville, Mo. While at Harrisonville High School, he was named the Greater Kansas City Metropolitan Principals Association Exemplary New Principal of the Year for the 2011-2012 school year.  He returned to the Lee’s Summit School District in 2015 as an administrator, then was named principal of Summit Ridge Academy, where he currently serves. He received his education specialist/school administration/superintendence certificate in 2017 from the University of Central Missouri.

He has been active with several professional organizations, including the Missouri Association of Secondary School Principals, the National Association of Secondary School Principals, the Greater Kansas City Metropolitan Principals Association (president-elect 2012-13 and president 2013-14). He received training in 2016 in trauma informed care from Truman Medical Centers – Center for Trauma Informed Innovation in Kansas City, Mo., and has been a strong advocate for trauma-informed schools by providing training and professional development on the topic in his district, state and region since that time.

Campbell and his wife Angela (C-SC ’91-’93) live in Lee’s Summit, Mo., and have two children. A son, Ashton Campbell, is attending Culver-Stockton and majoring in art education.