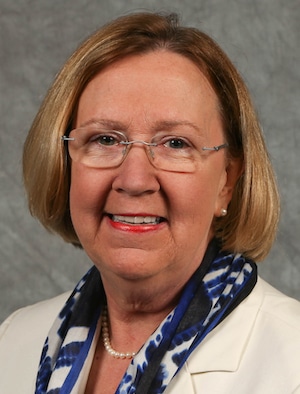 CANTON, Mo. — The Culver-Stockton College faculty presented Dr. Kelly M. Thompson with a proclamation on April 22 that honored her successful tenure as the college’s president.

Thompson, the 26th president in Culver-Stockton’s 167-year history, is retiring on June 30, 2020. She has led the college for six years and was the first woman president of the college.

The proclamation noted that Thompson led the fundraising efforts for the Carolyn L. and Robert W. Brown Residence Center, a $3 million facility that was completed in 2017, and an experiential learning center to be built as an addition to the Gladys Crown Student Center, as well as renovations to nearly every other building on campus.

It also lauded Thompson for her efforts to support Culver-Stockton’s 12 plus 3 academic semester calendar and its emphasis on experiential education. During Thompson’s tenure, the college launched an online graduate program for those seeking a master’s degree in education; announced an agreement with the University of Missouri that allows students to enter law school earlier; added a Master of Athletic Training program; and created an esports program and a women’s lacrosse program.

The proclamation praised Thompson for leading the “Culver-Stockton: Changing Lives!” comprehensive campaign that was designed to raise $25 million during an eight-year timeframe but far exceeded its goal, raising nearly $35 million and accomplishing most of its goals two years ahead of schedule. She also was congratulated for keeping enrollment numbers consistently strong. Total enrollment has topped more than 1,000 students for five consecutive years.