The George R. and Mary Frances Nichols Foundation recently made a $10,000 gift to Culver-Stockton College to be used toward the purchase of uniforms for the marching band, which will debut in the fall of 2020. 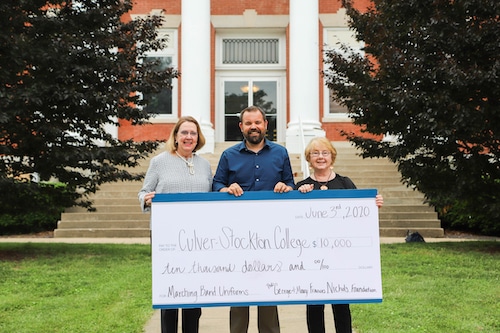 PHOTO CAPTION: The George R. and Mary Frances Nichols Foundation recently made a $10,000 gift to Culver-Stockton College to be used toward the purchase of uniforms for the marching band. Pictured from left are Dr. Kelly M. Thompson, president of the College; Ryan Christian ‘03, director of the marching band at C-SC; and Beverly Dunn ‘65, one of the directors of the Nichols Foundation.

CANTON, Mo. — The George R. and Mary Frances Nichols Foundation recently made a $10,000 gift to Culver-Stockton College to be used toward the purchase of uniforms for the marching band, which will debut in the fall of 2020. C-SC has not had a marching band in what is believed to be at least 50 years.

The foundation also has pledged to give an additional $5,000 next year for the uniforms.

“The Nichols Foundation truly believes in the student experience, and it has been so generous to assist us with facilities and provide scholarship support for our local students,” said Dr. Kelly M. Thompson, president of the College. “We are so grateful for their generosity in support of the marching band and our music program.

Beverly Dunn ’65 of Canton, a niece of the Nichols’, is one of three directors for the foundation along with her daughter, Kelly Patrick ’91 of Carthage, Ill., and her son, Patrick Dunn of St. Louis. Mrs. Dunn said she was familiar with the success that marching band director Ryan Christian ’03 enjoyed during his 15 years conducting the bands for the Lewis County C-1 School District before coming to C-SC.

“I knew (Christian) was the right choice to start this program at Culver-Stockton,” Mrs. Dunn said. “I’ve always loved music, and I’m thrilled to help get the band started again.”

George and Frances Nichols were lifelong members of the Canton community, and they owned and operated two John Deere dealerships in Lewis County — Lewistown Implement Co. for 10 years, and Nichols Implement Co. in Canton for 50 years. They established an endowed scholarship when they retired from their business in the 1980s, and they created a not-for-profit foundation in 1999.

As well as offering support to many causes throughout Lewis County, the foundation has made several significant gifts to Culver-Stockton College. The most recent were a $25,000 donation toward the J.E. & L.E. Mabee Recreation and Wellness Center that opened in February 2017, and another $25,000 donation to the Carolyn L. and Robert W. Brown Residence Hall that opened in September 2017. The baseball field at C-SC also is named Nichols Field.

The foundation also annually selects at least two students from both Canton High School and Highland High School in Ewing to receive $500 scholarships that are renewable for eight semesters of college. The students must attend an institution of higher learning in Missouri and maintain at least a 2.0 grade-point average while taking 12 hours of classes.