Larry D. Thompson ’67, who served as the U.S. Deputy Attorney General under President George W. Bush from 2001-03, will be the featured speaker for the annual Dr. John A. Sperry Jr. Endowed Chair of Humanities Lecture at 11:30 a.m. Thursday, March 5. 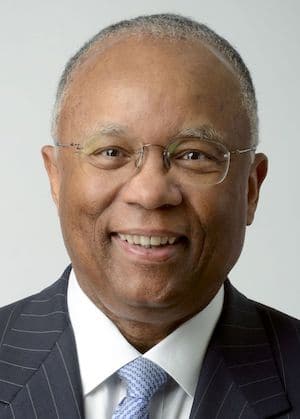 CANTON, Mo. — Larry D. Thompson ’67, who served as the U.S. Deputy Attorney General under President George W. Bush from 2001-03, will be the featured speaker for the annual Dr. John A. Sperry Jr. Endowed Chair of Humanities Lecture at 11:30 a.m. Thursday, March 5 in the Merillat Chapel and Recital Hall inside of the Robert W. Brown Performing Arts Center on the Culver-Stockton College campus.

The title of Thompson’s lecture is “Analog Lessons for the Digital Age.” The lecture is offered as part of C-SC’s academic and cultural events program. It is free and open to the public.

Thompson has been counsel to the Atlanta law firm of Finch McCranie LLP since July 2015.  He was appointed by the U.S. Department of Justice as the independent corporate compliance monitor and auditor for Volkswagen AG in April 2017.

Thompson was born and raised in Hannibal, Mo. After graduating from C-SC, he received his master’s degree from Michigan State University in 1969 and his Juris Doctor from the University of Michigan in 1974. He worked for Ford Motor Company during law school and later became a partner in the Atlanta law firm of King & Spalding.

Thompson served as the U.S. Attorney for the Northern District of Georgia from 1982-86. He directed the Southern Organized Crime Drug Enforcement Task Force and served on the Attorney General’s Economic Crime Council. Thompson was appointed in July 1995 as independent counsel for the investigation of rigged bids by the Department of Housing and Urban Development.

Congress selected Thompson to chair the Judicial Review Commission on Foreign Asset Control in April 2000, and he was confirmed as the deputy attorney general in 2001. He oversaw the day-to-day operations of the Department of Justice, including the oversight, coordination and direction of criminal investigations and prosecutions nationwide.

In 2002, Attorney General John Ashcroft named Thompson to lead the National Security Coordination Council, and President Bush named Thompson to head the Corporate Fraud Task Force. Thompson led the establishment of the Department of Justice’s Attorney Outreach Program, which resulted in the recruitment of attorneys from a wide range of ethnic, economic, geographic and racial backgrounds.

He left the Justice Department in August 2003 and was a senior fellow at the Brookings Institution in Washington, D.C., for a year before taking the job at PepsiCo. He was among the replacements considered for the U.S. Supreme Court after the death of Chief Justice William H. Rehnquist in 2005.

Thompson has stayed connected to Culver-Stockton. He was a member of the C-SC Board of Trustees from 1992-2002. He received the Distinguished Alumni award in 1983, he was the commencement speaker in 2002, and he was the keynote speaker as part of the Konneker Leader in Residence program in February 2017.

The lecture honors Sperry, a distinguished professor of humanities emeritus, for his dedication to the Culver-Stockton community. Sperry taught from 1957 to 1992 at C-SC, and he died in January 2003. He was best known for his enthusiasm and breadth of knowledge in the subjects of history and humanities.

Sperry and his wife, Jean, had a special connection with Thompson. He served as a mentor during Thompson’s time on campus, opening his eyes to a world filled with art. It was through the encouragement of the Sperrys that convinced Thompson to further his education after graduating from C-SC and go on to law school.