Donations from two families will allow the Culver-Stockton College athletic department to complete the first phase of the renovation of its weight training facility in Charles Field House. 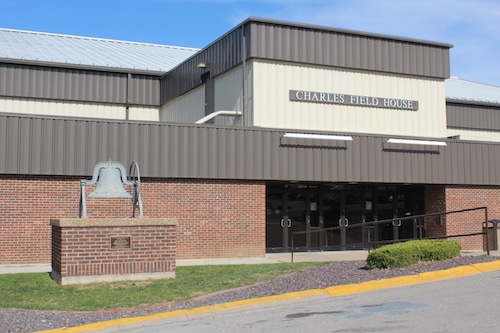 CANTON, Mo. — Donations from two families will allow the Culver-Stockton College athletic department to complete the first phase of the renovation of its weight training facility in Charles Field House.

A donation of $25,000 last winter from Blair ’62 and Arlene Stanicek was the lead gift, and a recent gift of $15,000 from the John and Helen Cornell Family Foundation completed fundraising for the first phase. New flooring will be installed, and four new weight racks, along with custom plates, benches and bars, will replace the equipment currently used.

“Students like to see upgrades, and to have someone invest in the weight room, that makes it become more valuable and more important,” said Pat Atwell, director of athletics at C-SC. “The demand for our weight room is always going up.”

Tom Sallay ’01 is entering his fourth season as the head football coach at Culver-Stockton. He says the weight room today looks like it did when he was an undergrad, so the improvements will certainly make a difference for all athletic teams.

“In the recruiting world, students want things that are eye-popping,” Sallay said. “A kid who walks in and sees a new floor and all this equipment with the Culver-Stockton logo, it’s eye-catching. For the athletes who are already here, they’re just seeing the continued commitment from the school to doing everything better.

Atwell hopes the flooring will be installed and the weight equipment available for use “early in the fall semester.”

Blair Stanicek, a native of Hinsdale, Ill., was a fullback on the football team for two seasons before he graduated from Culver-Stockton. He eventually went on to a 25-year career in sales with Medtronic plc, the world’s largest medical device company. He lives with Arlene, his wife, in Greenville, S.C.

Helen Cornell now is the president and CEO of Owensboro Grain Holding Company, Inc., in Owensboro, Ky. She retired in 2010 as executive vice president of finance and chief financial officer at Gardner Denver, a U.S.-based manufacturing company that has its corporate support services based in Quincy, Ill. Her husband, John, retired as the chief financial officer for Global Asia Partners, a private equity investments firm based in Haryana, India and Stateline, Nev. He previously served as director of business development for Harris Corporation’s Digital Telephone Systems Division in Quincy.

The Cornells, who live in Quincy, developed an affinity for Culver-Stockton because of the experience their son, Jack, enjoyed when he earned his first coaching position at C-SC in 2017. Jack Cornell, who played at the University of Illinois and briefly in the National Football League, now is the head football coach at Quincy Notre Dame High School.