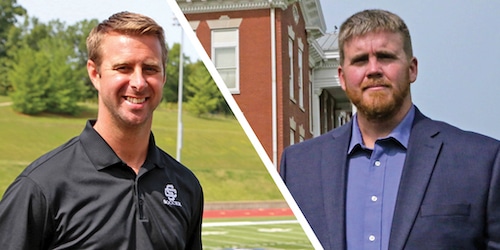 CANTON, Mo. — Culver-Stockton College faculty members Seth McBride, a lecturer in criminal justice, and Tyler Tomlinson ‘03, a lecturer in communication and the head coach of the women’s soccer team, were recognized on Sunday, Oct. 25 in The Quincy Herald-Whig’s annual 20 Under 40 publication.

The Herald-Whig has recognized 20 outstanding professionals under the age of 40 annually since 2007.

McBride is in his seventh year at the school and is serving his third year as the associate chair of the Division of Business, Education and Law.

A Hannibal, Mo., native, McBride is a commissioned sheriff’s deputy in Lewis County and served with the Hannibal Police Department from 2003 to 2012. To honor officers who made the ultimate sacrifice in the line of duty, McBride created the volunteer-driven Fallen Officer Project in 2018. Each spring, McBride selects a group of nine or 10 Culver-Stockton students to enroll in his “In the Line of Duty” class, where they learn about sacrifice in law enforcement and participate in the Fallen Officer Project.

In 2020, McBride was one of three faculty members to be awarded the Blue Apple Award for Excellence in Teaching that is presented by the Culver-Stockton Teacher Organization and voted on by C-SC students. The Criminal Justice Department also was named “Program of the Year” for the Fallen Officer Project.

McBride also is the president and co-founder of the Blue Wolverine Foundation, which was created in November 2016 after McBride and his wife, Kayla, received their son’s Type 1 diabetes diagnosis at Cardinal Glennon Hospital in St. Louis. In collaboration with the Juvenile Diabetes Research Foundation, the mission of the Blue Wolverine Foundation is to provide assistance to families in Northeast Missouri who have children with Type 1 diabetes.

In addition to creating and leading his own foundations, McBride also has served as a member of the board of directors at Douglass Community Services in Hannibal, Mo., since November 2015. Click here to read McBride’s profile for the publication.

Tomlinson has served as head coach of the women’s soccer team at Culver-Stockton since February 2011 and is the all-time winningest coach in program history with a 88-75-15 overall record. This year’s team has a 3-3-1 record during an amended season. Tomlinson has had 17 players named to the all-Heart of America Athletic Conference team and 16 players named Daktronics-NAIA Scholar-Athletes.

Tomlinson is the media coordinator for the C-SC athletic department, a natural fit for him after previously working as a sports anchor at WGEM-TV in Quincy, Ill. He also was a co-host of WGEM Sportscenter, a daily talk sports show on WGEM AM radio.

Under Tomlinson’s leadership, the women’s soccer team has been a key contributor to the college’s annual Toys for Tots toy drive at Christmas. Tomlinson also has coordinated a Kick it for Cancer fundraiser for several years, raising funds for the National Foundation for Cancer Research. His team also is the host of a Field of Dreams Uganda night each season during which cleats, shirts, shorts, soccer balls and other items are collected and sent to orphaned and vulnerable children in Uganda. Click here to read Tomlinson’s profile for the publication.