‘The Vagina Monologues’ to be performed four times in February

Culver-Stockton College will be presenting “The Vagina Monologues” in the Mabee Little Theater in the lower level of the Robert W. Brown Performing Arts Center in February. Performances are scheduled for 7:30 p.m. on Feb. 13, 14 and 15, with a 3 p.m. 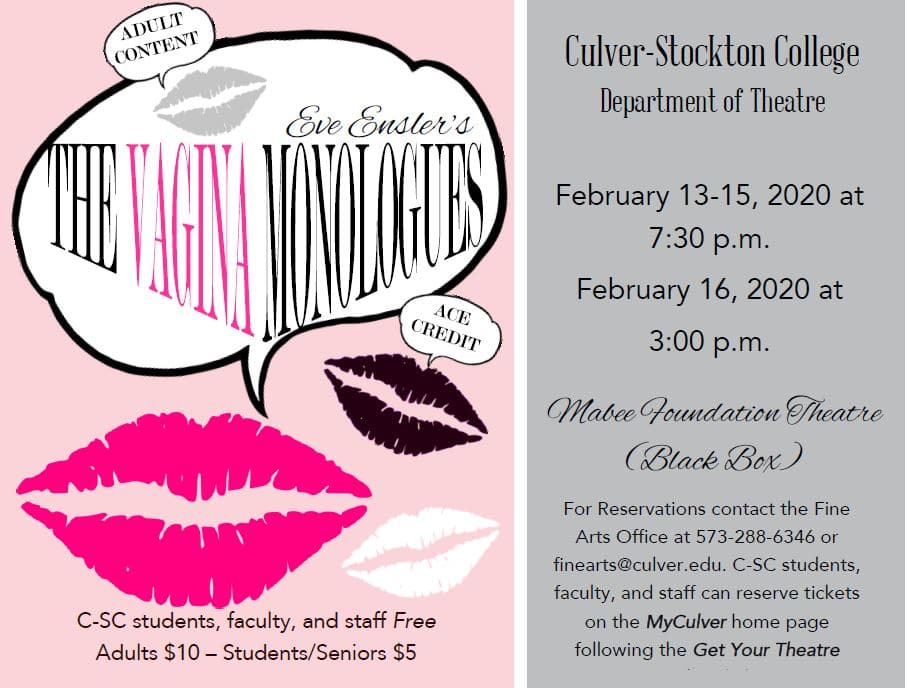 CANTON, Mo. — Culver-Stockton College will be presenting “The Vagina Monologues” in the Mabee Little Theater in the lower level of the Robert W. Brown Performing Arts Center in February.

After conducting interviews with more than 200 women about their own encounters with sex, relationships, and violence, playwright Eve Ensler crafted their experiences into a series of stories designed to raise awareness and anger in reaction to violence against women. She performed these stories herself as monologues in 1996. Subsequent revisions using women of various ages have enhanced awareness of the extent of violence to more than youth.

Faculty and members of the community will join student performers to emphasize the scope of this issue. Dr. Haidee Heaton will direct “The Vagina Monologues,” which contains subject matter
that is adult in nature.

The ensemble cast consists of:

Performances are open to the public. Tickets are $10 apiece for adults and $5 for non-C-SC students as part of theatre department and academic and cultural events programming.