Precautions taken for the COVID-19 pandemic are preventing live performances on the Culver-Stockton campus this year. In spite of those difficulties, the theatre department recently created a production that will be receiving national recognition. 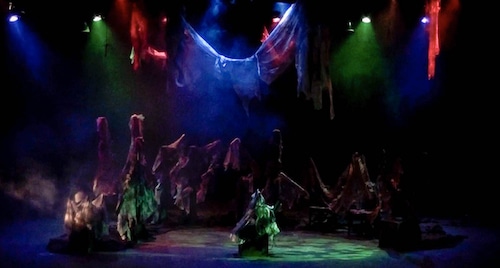 CANTON, Mo. — Precautions taken for the COVID-19 pandemic are preventing live performances on the Culver-Stockton College campus this year, but in spite of those difficulties, the theatre department recently created a production that will be receiving national recognition later this month.

Culver-Stockton’s fall mainstage production, “The Blind,” was made available on YouTube during the fall semester from October 23-31. Now it has been chosen for presentation during one of eight regional festivals as part of the Kennedy Center’s American College Theatre Festival, a national theatre program that recognizes and celebrates the finest and most diverse work produced by colleges and universities across the country.

This year’s festival in Region V, which consists of Iowa, Kansas, Minnesota, Missouri, Nebraska, North Dakota and South Dakota, will be virtual. C-SC’s production, one of 12 that was selected, will be offered on YouTube from January 16-23. The weeklong festival also offers competitions and workshops in multiple areas.

“We have had invited scenes before, but this is the first time a Culver-Stockton theatre production has been invited to the festival in whole,” said Dr. Haidee Heaton, a professor of theatre and chair of the theatre and communications departments. “It is a big honor to recognized by our region. In a time of such flux for our artform, it is a true testament to our students’ adaptability, trust in our program and willingness to experiment that we are allowed this wonderful opportunity.”

“The Blind,” written by Maurice Maeterlinck and translated by Suzanne Burgoyne, is a one-act tale of hope and despair. Eight sightless people sit in wait for their caretaker to arrive and help them find their way home, but elements of the outside world present obstacles at every turn. “The Blind” was written in 1890 but remains all-too familiar today as society attempts to navigate an ever-changing, ever-challenging world.

The C-SC Theatre Department reversed the norm of the theatre-going experience by only relying on actors’ voices while allowing design elements to visually stand front and center. “The Blind” was directed by Heaton and designed by Seth Campbell, assistant professor of theatre. Michael York served as assistant technical director.

The cast consisted of:

Kristen Lippold, a senior English education major from Carlinville, Ill., was the stage manager for the production.

Students in Culver-Stockton’s fine arts program have the opportunity to design mainstage productions and direct full-length shows. They perform in productions as early as their first semester. Four mainstage productions, including multiple student-directed one act plays and one musical, are produced each year. Go to https://www.culver.edu/future-students/undergraduate/majors/the/ to learn more about the theatre program.