The Culver-Stockton College Department of Music continues to honor tradition by sharing music of yuletide in its 2020 Christmas Concert. The Concert, Chamber and Collegiate Choirs sing age-old carols and chants, as well as modern expressions of joy. 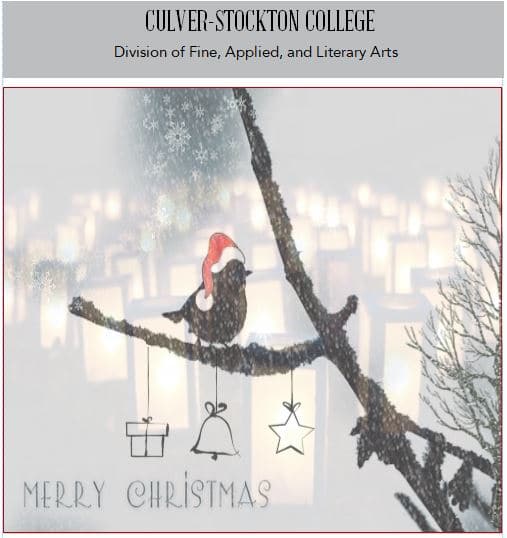 CANTON, Mo. — The Culver-Stockton College Department of Music continues to honor tradition by sharing music of yuletide in its 2020 Christmas Concert.

The Concert, Chamber and Collegiate Choirs sing age-old carols and chants, as well as modern expressions of joy, to celebrate a season of peace and goodwill.  The choirs are directed by Dr. Scott Allison, assistant professor of music. He is accompanied by Dr. Dylan Marney, associate professor of music.

Precautions taken for the COVID-19 pandemic prevent live performances on campus this year, but this year’s musical selections can be found on YouTube. The Collegiate Choir was divided into treble, bass and mixed choirs to honor social distancing and meet rehearsal safety guidelines.

The Collegiate Treble Choir explores an ancient English chant, brought to harmony in the “1514 Sarum Primer” and set to tonalities of today in Dan Forrest’s arrangement of the “Sussex Carol.”  The choir then continues with scriptural words of hope expressed in “Psalm 23” in an arrangement by Randall Stroope. The Collegiate Bass Choir follows with a setting of Isaac Watts’ “Cradle Hymn” by contemporary Norwegian composer Kim André Arnesen.

The treble and bass choirs also rehearsed as two mixed voice choirs for this Concert. Collegiate Mixed Voice Choir A reminds us of the joy of the season in Craig Courtney’s setting in English of the German carol “How Great Our Joy.” Collegiate Mixed Voice Choir B seeks to “illumine through sound” as composer Morten Lauridsen describes his blend of 13th century apocryphal accounts of animals at the crèche with references to the liturgical Gregorian Christmas matins chant.

Expressing Christmas joy takes on many guises, and the Chamber Choir presents one of the most rhythmically delightful in Robert Shaw and Alice Parker’s arrangement of the Catalan carol “Fum, Fum, Fum.” Dating from the 16th century, this carol recalls a widespread European tradition of processing to the church on Christmas Eve and feasting after Mass.

The Chamber Choir brings a jazz standard to Russ Robinson’s arrangement of “Have Yourself a Merry Little Christmas.” Written in 1943 in the dark days of World War II for the movie “Meet Me in St. Louis,” the song reminds us that someday “we all will be together, if the fates allow” and offers with it the hope that next year, we will all be together making music.

In “Spotless Rose,” the Concert Choir relates a tale of the Nativity, foretold in Isaiah and already reimagined in a 16th century poetic text: “from the root of Jesse shall spring forth a flower to show God’s love for all humanity.” Composer Ola Gjeilo’s setting of the medieval carol text works equally well in English or in his native Norwegian. The soloists are sopranos Anna Gabel, a sophomore art education major from Quincy, Ill., and J’ordan Scurlock, a senior criminal justice major from St. Louis.

In Arvo Pärt’s setting of the scriptural antiphon “Magnificat,” Mary’s song of exultation at bearing God’s son shifts and resounds with a bell-like effect through a compositional technique called tintinnabuli. The choir weaves beautiful harmonies around the fixed tone of a soprano chant, sung by Dr. Carol Mathieson, professor emerita of music.

Fred Bock’s “Peace, Peace,” a highlight of C-SC Christmas Concerts for several years, partners the traditional German carol “Silent Night” with the composer’s own expression of the yearning of the season for peace on earth. With a soprano saxophone obbligato played by Dr. Trent Hollinger, associate professor of music, the Concert Choir crescendos gradually to the finale, when all of the choirs join in with the beloved carol — peace, peace, Silent Night.